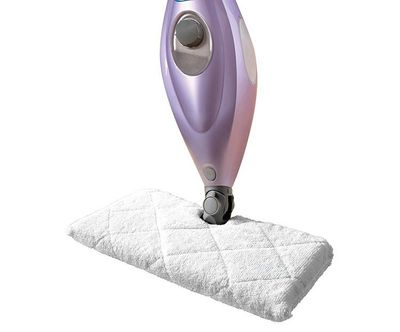 Every craftsman knows that one of the most important steps in any project is picking the best tool for your job's specific needs. Using the right tool can save untold time, effort, and headache over the course of a long job. Using the wrong tool can, well... you get the idea.

When it comes to keeping your floors clean, if you have a lot of surface area to manage the Shark Steam Pocket Mop Deluxe (S3501N) should be your tool of choice. The Steam Pocket has a large water reservoir and utilizes on-demand variable steam to maximize your tank capacity and save on trips to the sink.

A clever feature the S3501N includes is a unique double-sided mop head that doubles its effective square-footage and lets you go longer between changing pads. Top it off with an extra long 30 foot power cord, and you've got a steam mop that can cover some serious ground before needing to re-fuel.

The Shark Steam Pocket Mop is a simple design that enables you to clean large areas of floor without the need for constant stops to refill water or change the mop cloth. The double-sided mop head is also a bit of a double-edged sword; not having a single central steam nozzle means this model lacks some of the deep cleaning power seen in high end steam mops. That said, this mop lets you cover more distance on a single fill than almost any other mop, and does it quickly.

​As mentioned above, the Shark S3501N Deluxe is optimally designed to clean the largest possible surface area with the fewest interruptions. At almost 2 cups, the water tank is bigger than the average of 1-1.5 cups. The steam pocket also maximizes water efficiency by using a variable system that's activated by your own motion as you push the mop. The mop itself is incredibly lightweight and a breeze to move around the floor. The small mop head fits into tight spaces and under appliances well.

Perhaps the most unique feature​ is the Steam Pocket's double sided mop head. A single side of the mop head is similar to most other steam mops on the market: 6" X 12". What sets this mop apart is that once you dirty up one side of the cloth, you can simply flip the mop head over and keep going with the other side. This means you can work twice as long without having to pause and do a cloth change compared to your typical steam mop.

The big downside to this design is that it lacks a strong central steam unit. ​Because the steam has to flip between top and bottom of the pad, it's not as focused as a traditional single-sided steam mop. And since the steam flow is motion-activated, it's ineffective to hold the mop on top of a bad stain for a couple seconds in an attempt to blast it.

​The Steam Pocket is also dead simple to set up and get started with. Simply fill the water tank up with tap water, close the cap, and turn it on! Once you turn it on, the internal water heater will only need about 30 seconds to start producing steam, and then you're good to go.

Before you begin, one important note: 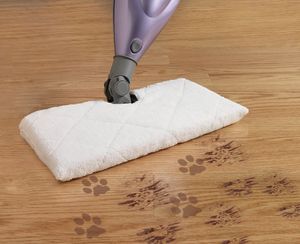 Never put any sort of chemicals or cleaner into your Shark Steam Pocket. The Steam Pocket works just fine with 100% tap water, and adding in any chemicals can not only damage the internals of the mop, they can also damage your floors.

You should be able to ​remove most dirt and dust in a single pass, but you'll probably need to revisit problem stains and sticky spots. The best recommendation is to go over your entire floor once, and then go back and attack the problem spots with a fresh pad.

The Shark Steam Pocket Mop is perfect for anyone with a large house full of hardwood or other solid flooring. ​It's great for covering large distances quickly, and also great for reaching into tight corners and under furniture. It's possible to clean 2,500+ sq ft in under an hour with this steam mop, which means if your house is primarily hard floors this should be one of your top considerations.

What's in the box?

First things first: assembly is straightforward as you simply screw the rectangular mop head onto the water tank, and then screw in the handle on top of that. The Steam Pocket also includes a filling flask to help you can fill quickly without worrying about spills.

It's worth noting the Steam Pocket only comes with a single microfiber pad. Even though the pads are tough and built to be reused many times, you might want to pick up an extra pad or two in case something happens to your original. Even though most steam mops come with 2 pads out of the box, we're willing to give Shark a pass on this one because the single pad is the size of two comparable mop pads.

If you need to clean large spaces in the shortest possible time, then the Shark Steam Pocket is a top choice. While you may have to go back and spot-clean heavy stains, you'll still come out ahead with the time saved on the rest of your floors. Given its low base price, the Steam Pocket S5301 Deluxe is one of the best budget buys on the market.